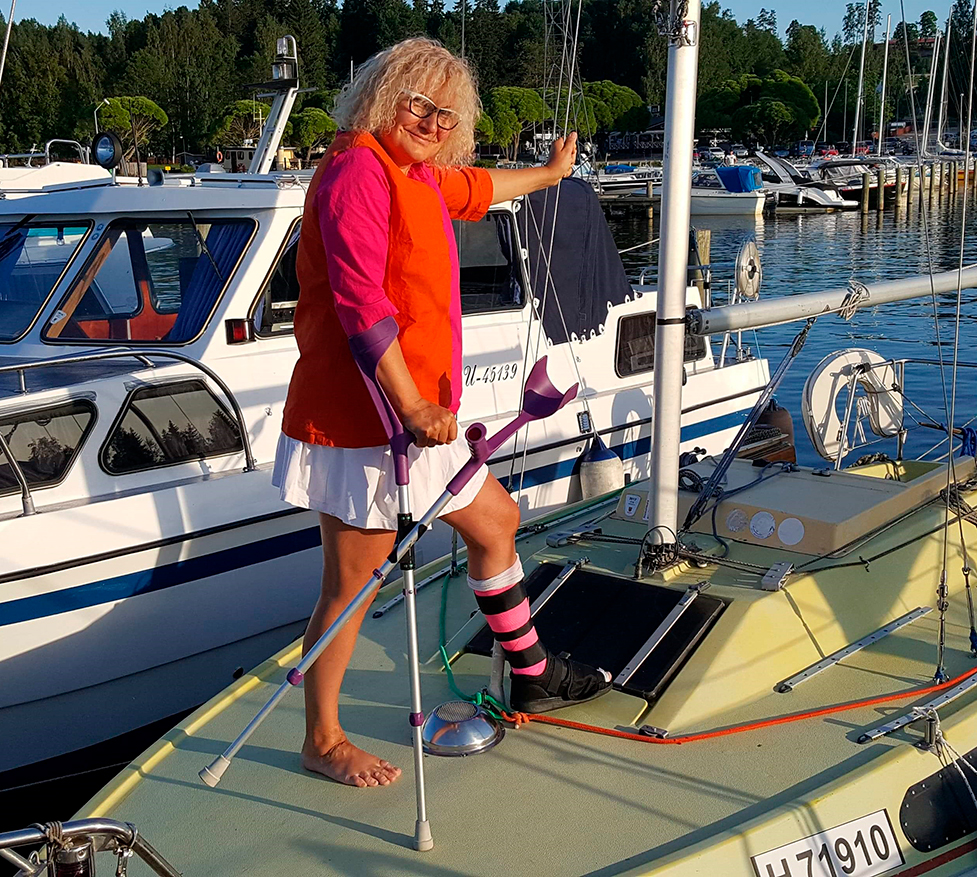 XCLIP crutch holder is a great help in a small package

An evening of theatre practice, warm-up exercises, sudden change in direction – and boom, an Achilles tendon snaps. “Fortunately, one of the actors was a doctor which meant that I got help quickly,” says designer Riikka Salokannel, who had been filling in for the director, with a laugh. She suddenly found herself in the role of the patient.

Later, Riikka was taken to the Akuutti emergency service of Päijät-Hämeen Keskussairaala (Päijät-Häme central hospital), a cast was put on her foot and she was handed forearm crutches. She then started waiting for an appointment for surgery. This injury made the former active athlete, biathlonist and very active working person stop and feel confused, but also a little annoyed at this happening right before summer: “Is this it for my summer plans now?”

Crutches falling over are a far greater and more vexing problem than we think. It is difficult to control them in many situations, and when they tumble to the floor, they cause awkward but also helpless situations. “Bending down to retrieve crutches that have spread all over the floor, when your legs don’t bend, is also difficult, and crouching is a strain on the knees,” Riikka says.
This is why using crutches often decreases activity, which slows down rehabilitation.

Riikka received the XCLIP crutch holder directly after her Achilles tendon snapped, a few weeks before her operation. XCLIP provided concrete help with moving around on crutches, and Riikka was able to remain very active considering her situation and her basic condition did not deteriorate. She even remained in good spirits before the surgery!

The summer was warm and Riikka went on holiday and did some sailing, as well. These situations really put the XCLIP holder to the test.
“Just being able to carry two crutches with one hand was a great help on the boat. I could use the other hand to hold on to the boat for support, and I would need both crutches as soon as I stepped onto the pier. It is also nice to not have to put your crutches on the ground or floor in various bathrooms and outhouses along the way, and even something so mundane as paying at the till can prove very difficult if you have no free hands,” Riikka Salokannel says, listing the benefits of the XCLIP crutch holder.

Riikka Salokannel is a designer with comprehensive experience in design from product design to packaging design and branding, which is why we asked Riikka to assess the product from the point of view of a designer, as well:

“XCLIP is small, light and easy to carry with you everywhere with the crutches. Thanks to the X shape, the crutches form a very sturdy entity. The crutches require a very small supporting surface and can stand almost anywhere thanks to the XCLIP. This is very important when the user needs to free their hands – to answer the telephone, look for their keys, open doors, go about their business in a coffee house, office or just about anywhere else. It is also functional; the crutches are easy to attach, the clip does not get in the way or scratch or get caught anywhere. The fact that the clip can be easily rotated also eases the use of the crutches.

On the other hand, XCLIP increases safety when going up or down stairs as the crutches can be clipped onto each other very quickly. This allows for holding on to the railing with the free hand. There are a surprising number of places that are difficult to navigate with crutches; it has been a great help to be able to attach the crutches together to form a walking stick in buses, on escalators and in doorways.”

The XCLIP allows for the crutches to stand up almost anywhere and the other crutch can be carried along conveniently when you have the opportunity to hold on to the bowsprit of the boat for support, for example. The creative nature of Riikka Salokantele is also evident in using the XCLIP very innovatively. Thanks to the XCLIP, forearm crutches can also be used as umbrella holders, for example.