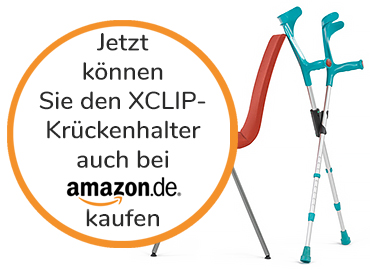 The XCLIP crutch holder, developed and manufactured in Finland, has now found its way to the Amazon.de online store in Germany. And best of all, customers have also found the XCLIP holder in Amazon’s online store selection and given extremely good feedback on it.

The crutch holder has been developed by physiotherapist Ari Pellinen in collaboration with product designer Heikki Koivurova, Total Desing Oy.

– When I worked as a physiotherapist in the surgical department, I noticed that the falling of crutches was a big problem for both the patient and the nursing staff, says physiotherapist Ari Pellinen about the backgrounds of developing the XCLIP crutch holder.

– It was embarrassing for the patient to repeatedly ask the staff to lift the crutches that fell to the floor, and thus active rehabilitation did not start as I would have wanted as a physiotherapist. And on the other hand, the time of the staff was also spent repeatedly lifting the crutches.

To solve the problem of falling crutches, we developed first the YSTAND floor stand , which has sold several thousand units mainly to hospitals.

– YSTAND is very good aid in care facilities and various service points, for example. Because a floor stand of more than three kilograms cannot be taken to a café, pharmacy or supermarket, there was a need to develop an accompanying holder, Ari Pellinen laughs.

The XCLIP crutch holder solves this problem, as the 60-grams holder runs on another crutch and is always and everywhere available. Thanks to the X shape, the crutches form a very sturdy entity and can stand almost anywhere. To stay upright, the crutches require a very small suporting surface – the corner of the table, the edge of the cash desk.

– For example, on a walk where there are no support points nearby, a pair of crutches can be placed against their own body, and at the same time you can answer the phone, put on the zipper of the jacket or put on the gloves. And the crutches don’t fall down! Before we went to Amazon in Germany, we had received excellent user feedback from the Finnish and Swedish users.

– The most important thing is that for falling crutches has finally been developed solution which really works. And this solution, XCLIP, makes it much much easier to move on the stairs also. Thanks to XCLIP, the crutches become a real aid  and the crutches are no longer a nuisance that should get disable as soon as possible. XCLIP also increases the safety of rehabilitation and the use of crutches, and improves their hygiene also, physiotherapist Ari Pellinen promises.

⇒ Other XCLIP retailers in EU Region, Sweden and Norway

“Grazie xclip, avevo delle difficolta’ quando dovevo fare le scale oppure dovevo aprire le porte, non sapevo mai come fare a tenere due stampelle con una sola mano, poi ho provato XCLIP ed evoila’ il gioco è fatto, molto semplice da installare e facilissimo da usare, mi ha risolto molti problemi, grazie grazie grazie,
thanks xclip, I had difficulties when I had to do the stairs or I had to open the doors, I never knew how to hold two crutches with one hand, then I tried XCLIP and evoila ‘the game is done, very simple to install and easy to use, I solved many problems, thanks thanks thanks!”